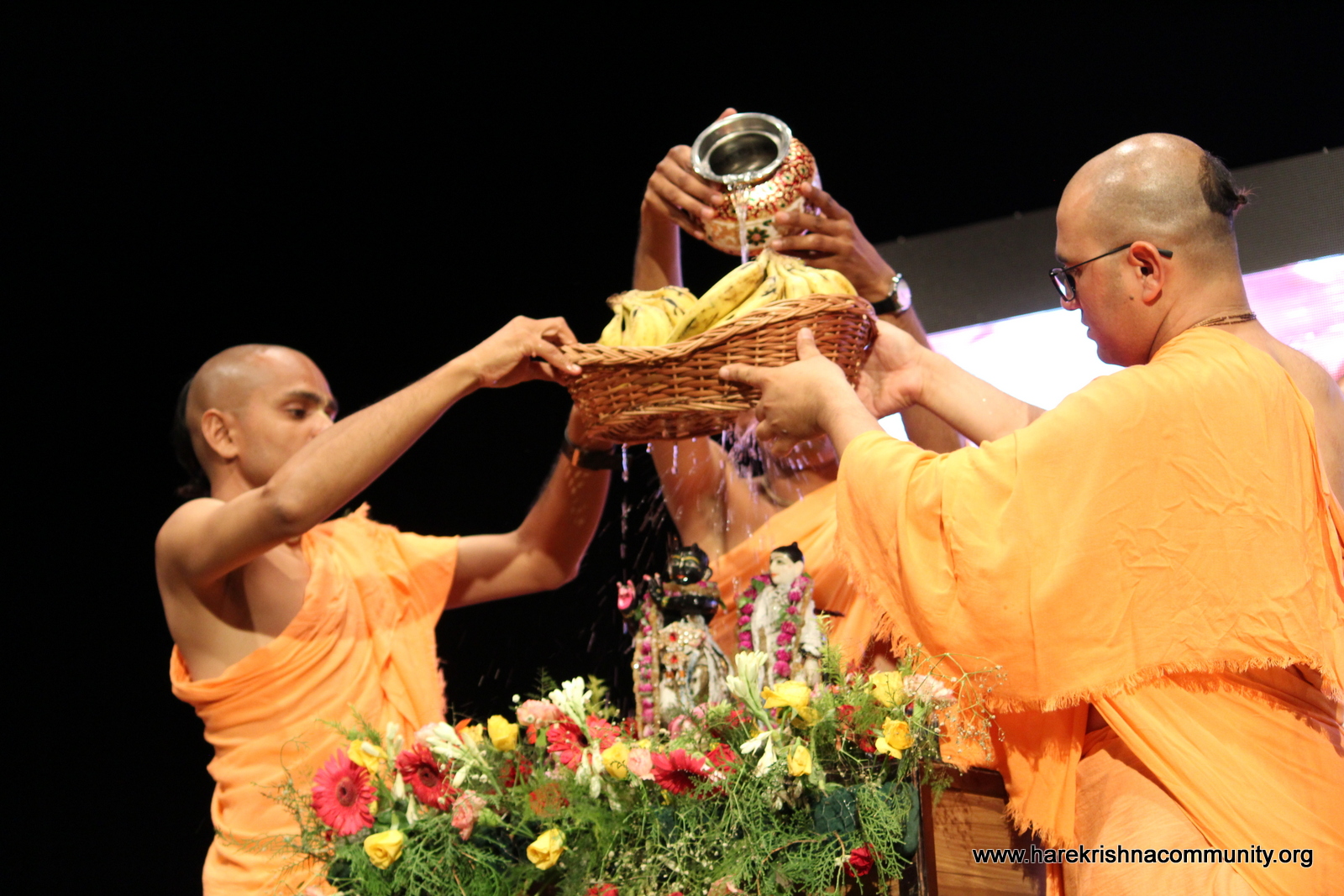 Celebrating the Grand Appearnce of Lord Krishna, we organized the Janmashtami Festival on 24th August 2019 at Janaki Devi Public School, Jaipur. Hundreds of devotees, students and audience gathered together for this very special occasion. The festival startedi with video shows of ancient temples of Lord Krishna throughout India. Then we had grand sankirtan and bhajans by the devotees.

His Grace Raghav Pandit Prabhu came on to the stage next to deliver the festival lecture who explained the reason of appearance of Lord Krishna and His pastimes. He also emphasized on the importance of performing devotional service.He explained the necessity of rules and regulations in the devotional pratice. He also took on the doubts of the audience and answered them with crude examples.A live drama was performed by “Vaikuntha Players” depicting the Legend of the Appearance of Lord Jagannath in the Neelachal Kshetra or Jagannath Puri in Odisha.

After the end of the live drama, The Grand Abhishekam of Lord Krishna and Radha Rani took place, with audience also getting a chance to perform abhishekam of Their Lordship.

After the deities got ready, more than 1008 types of delicious food items were offered to Them and a Grand Arati took place.

At the end all the people gathered for the festival were distributed Sri Krishna Prasadam. 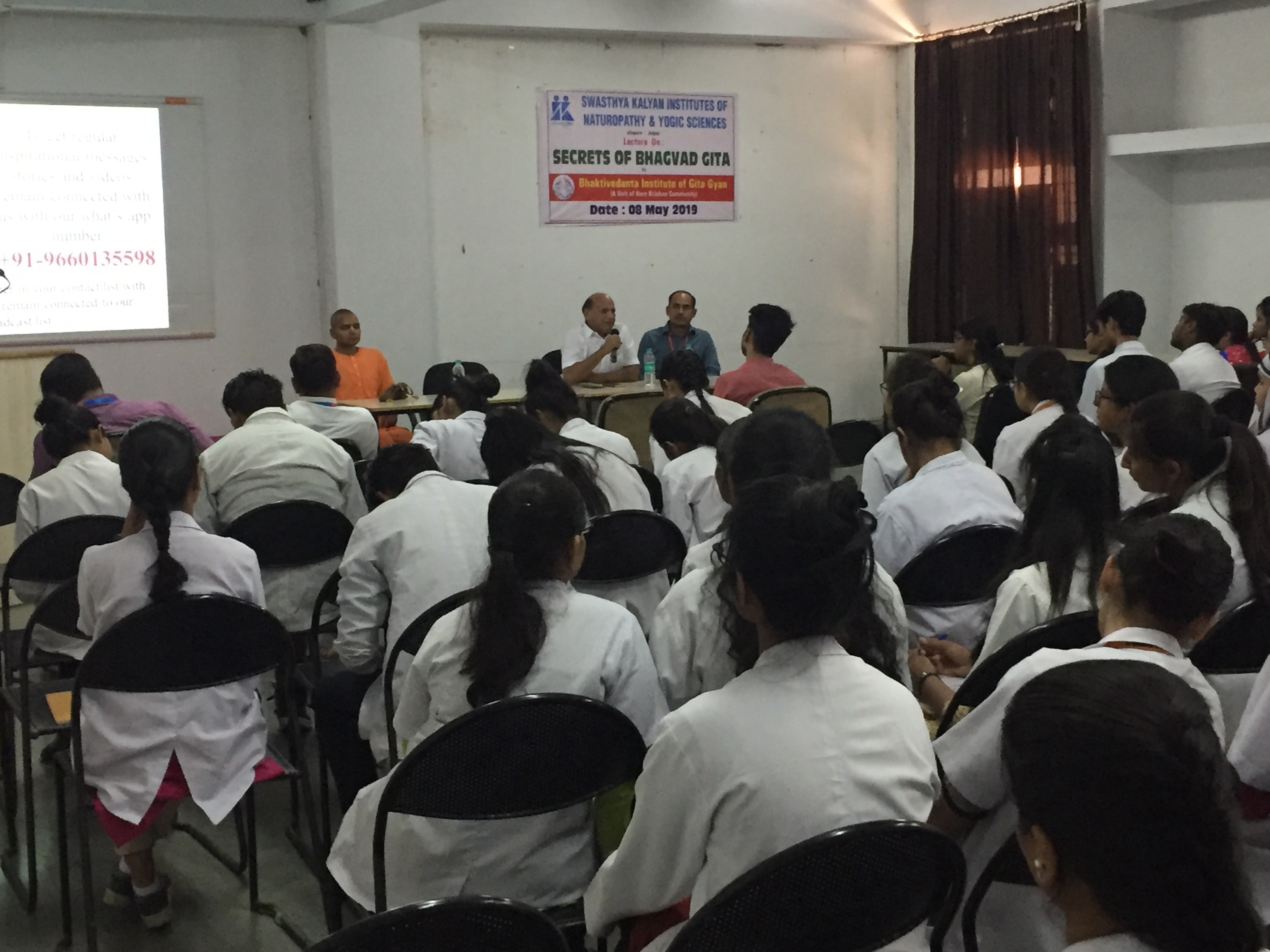 Seminar at College of Yogic Science

We recently organized a seminar for the students at the College of Yogic Science, Swasthya Kalyan Campus, Jaipur.
The seminar was based on “Purpose of Bhagavad Gita”.
The definition of God, The five points covered in Bhagavad Gita, What is actual  emperical  philosophy?, How to act according to Bhagavad Gita – These were some major topics which was covered while the speaker, His Grace Raghav Pandit Das was presenting the seminar in front of the medical students.
There was more than half an hour question and answer session in which the students put up their thoughts, querries and smart questions and all of them got their answeres.

Some of the students also came up and took the books of Srila Prabhupada. 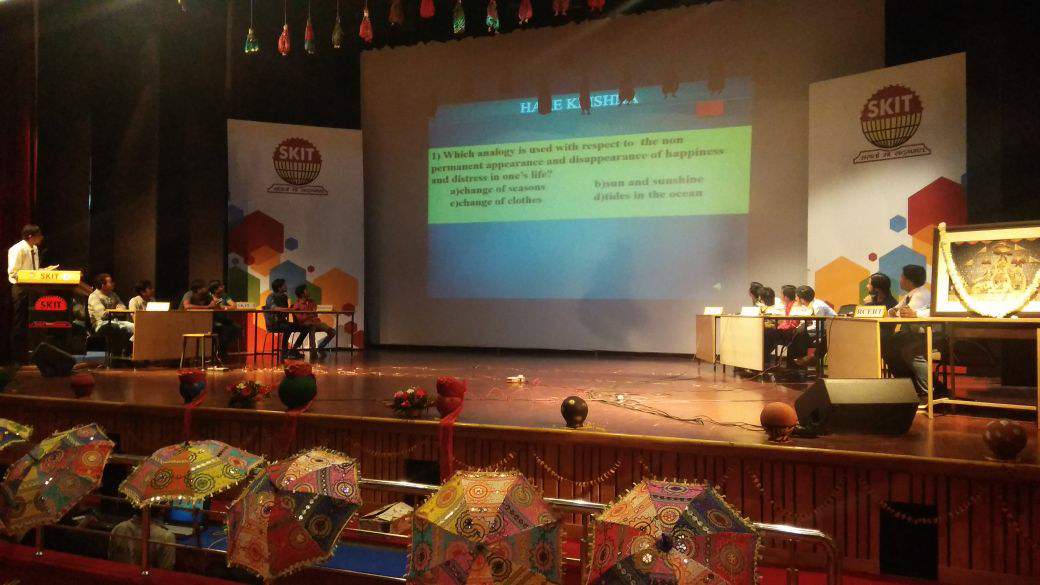 After the discussion, the Gita Gyan Quiz got started. The students enrolled for this quiz were more than 350 in number and final participants for the quiz were selected through a screening test. The final quiz had seven teams from different engineering colleges. After a series of rounds and nail-biting ties, first team from SKIT emerged as winner with JECRC and second team from SKIT emerged as Runner Up and Second Runner Up.

In the last segment of the event, there was a drama titled “Lage Raho Munna Bhai” performed by the students which depicted the quest of spiritual master or “Guru” by Munna Bhai and his sly & roguish assistant Circuit.
At the end of the drama the audience adieu was done with delicious Krishna Prasadam refreshments. 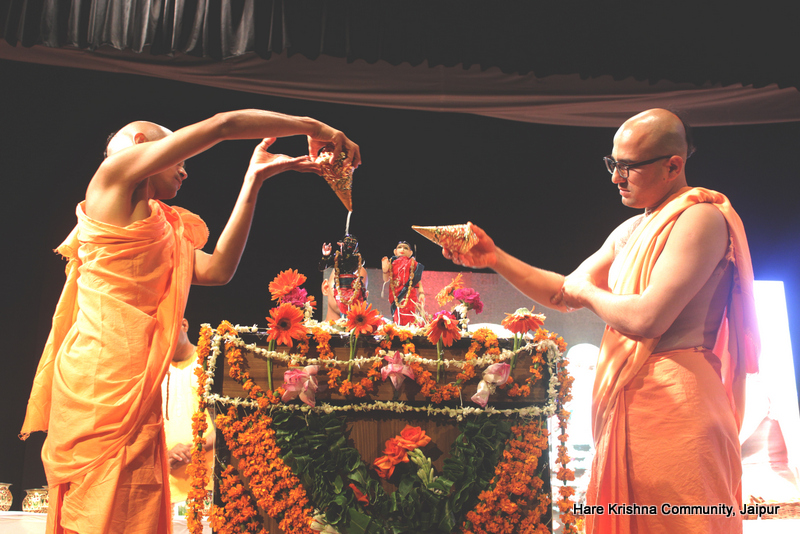 This year in Jaipur,we celebrated Janmashtami Festival at Janki Devi Public School Auditorium on 15th of August 2017 in high devotional spirits, pomp and above all in great joy for the holy appearance of the Supreme Personality of Godhead; Lord Krishna.

It is said Harinam Sankirtan is the most auspicious of all sacrificial performances and drives away all evil from the atmosphere and also removes all impurities inside our heart .It also makes us feel happy by bringing us out from all material implications till we are chanting Lord’s holy name.So we started the program with harinam sankirtan and also did it during short intervals between different events/segments.

Srila Prabhupada says that there is no difference between Lord Krishna and his pastimes. Such pastimes are always relish-able because such pastimes immediately makes you remember the Lord.  The devotees presented such a drama names as “The Touchstone.”
At the scheduled time we performed the mahabhishekam of Their Lordship Shri Shri Radha Raman Ji with melodious chanting of Brahma-Samhita prayers going on in the background.
At the end of the celebration, Shri Krishna prasdam was distributed to all the persons who were part of this celebration. 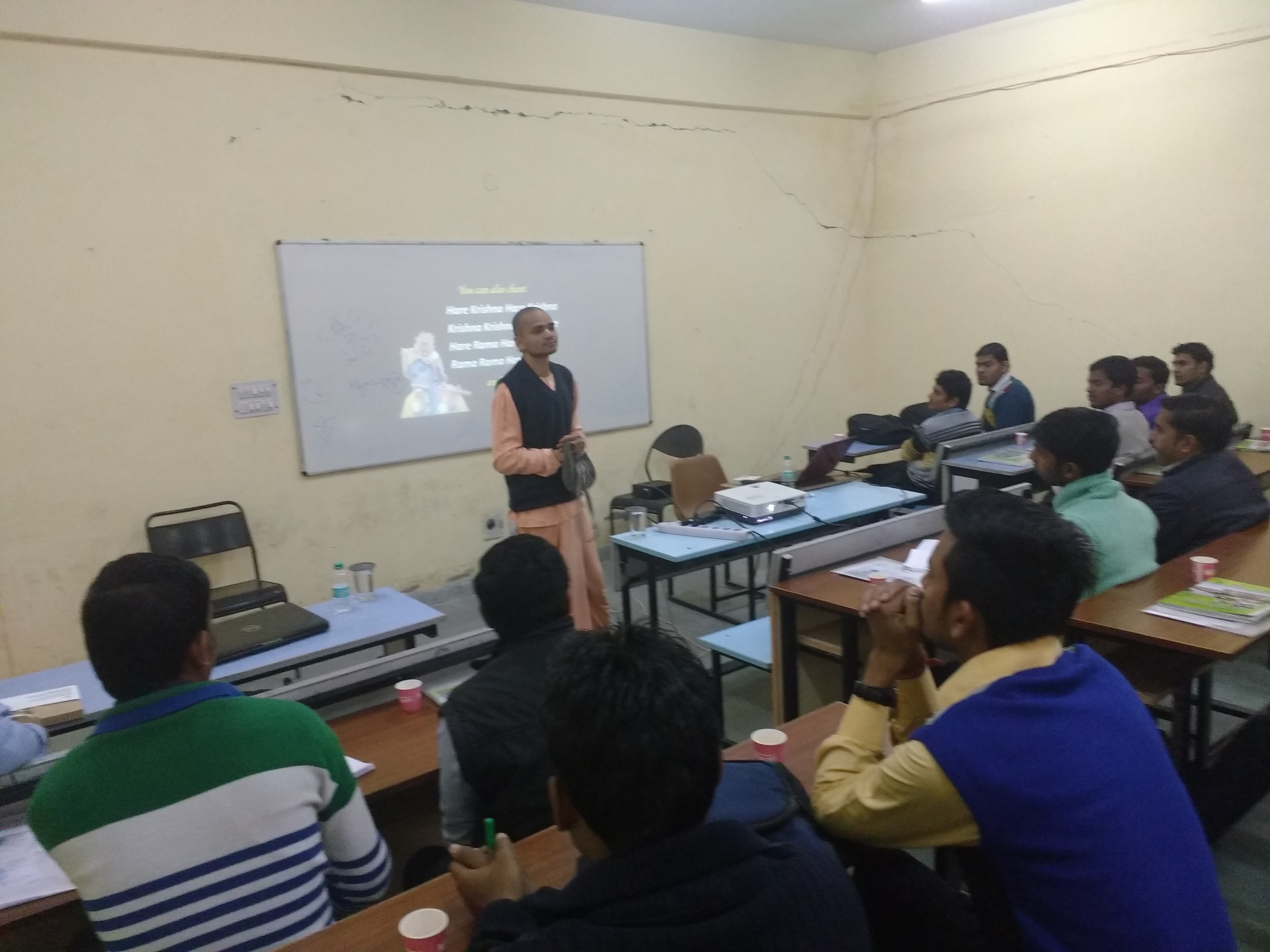 An expert lecture was held in Central Institute of Plastics Engineering & Technology (CIPET), Jaipur  in the field of “Meditation for better productivity on 15th of February for the trainee officials who had come there for their pre-posting training at the Jaipur branch.

The seminar was focused on the meditation methods, the relationship between science and spirituality and audience was very interactive and was putting up the queries. At the end many of the officials took Srila Prabhupada’s original books from us. 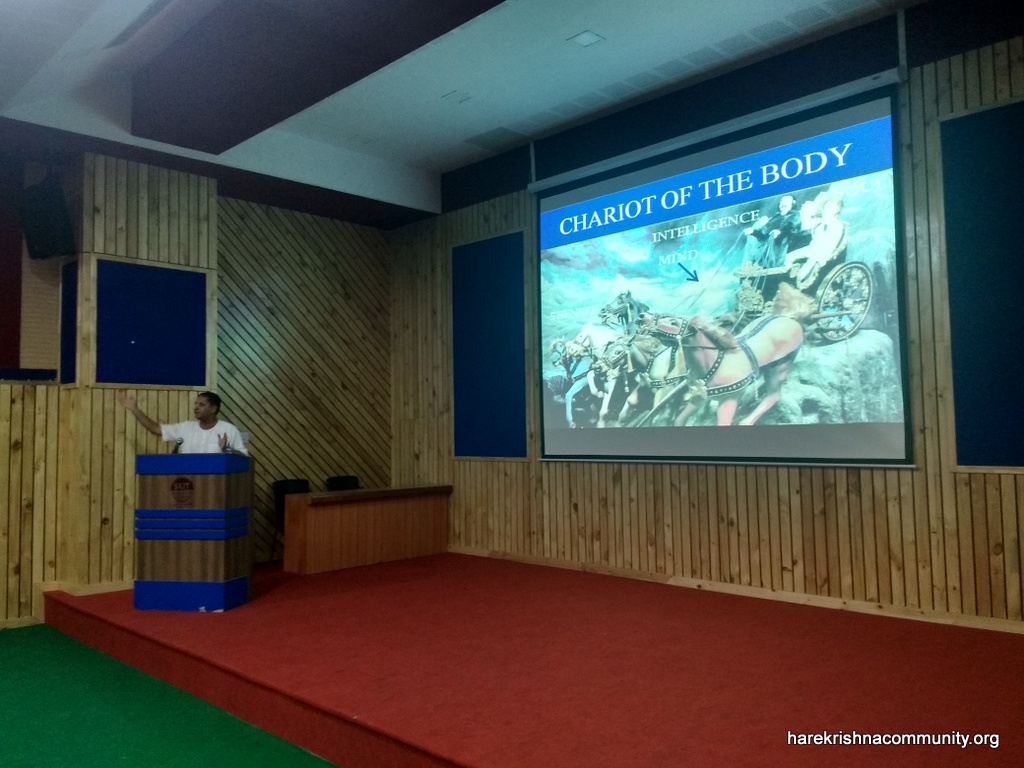 A special seminar “Prayas-An Effort for Spiritual Awakening” was held at J.C. Bose Seminar Hall,Civil Block in Swami Kesvanand Institute of Technology, Jaipur. The topic of the seminar was “Gateway to Greatway” and it was illustrated by Hare Krishna Community’s President, Shri Dayalu Nitai Prabhu.

The seminar was attended by approximately 100 students and faculty members and a lot of questions were asked by the students All the questions were answered brilliantly answered and very helpful suggestions and life-mantras were given to students.The seminar/program was concluded with sweet prasadam being distributed all those who attended the seminar. 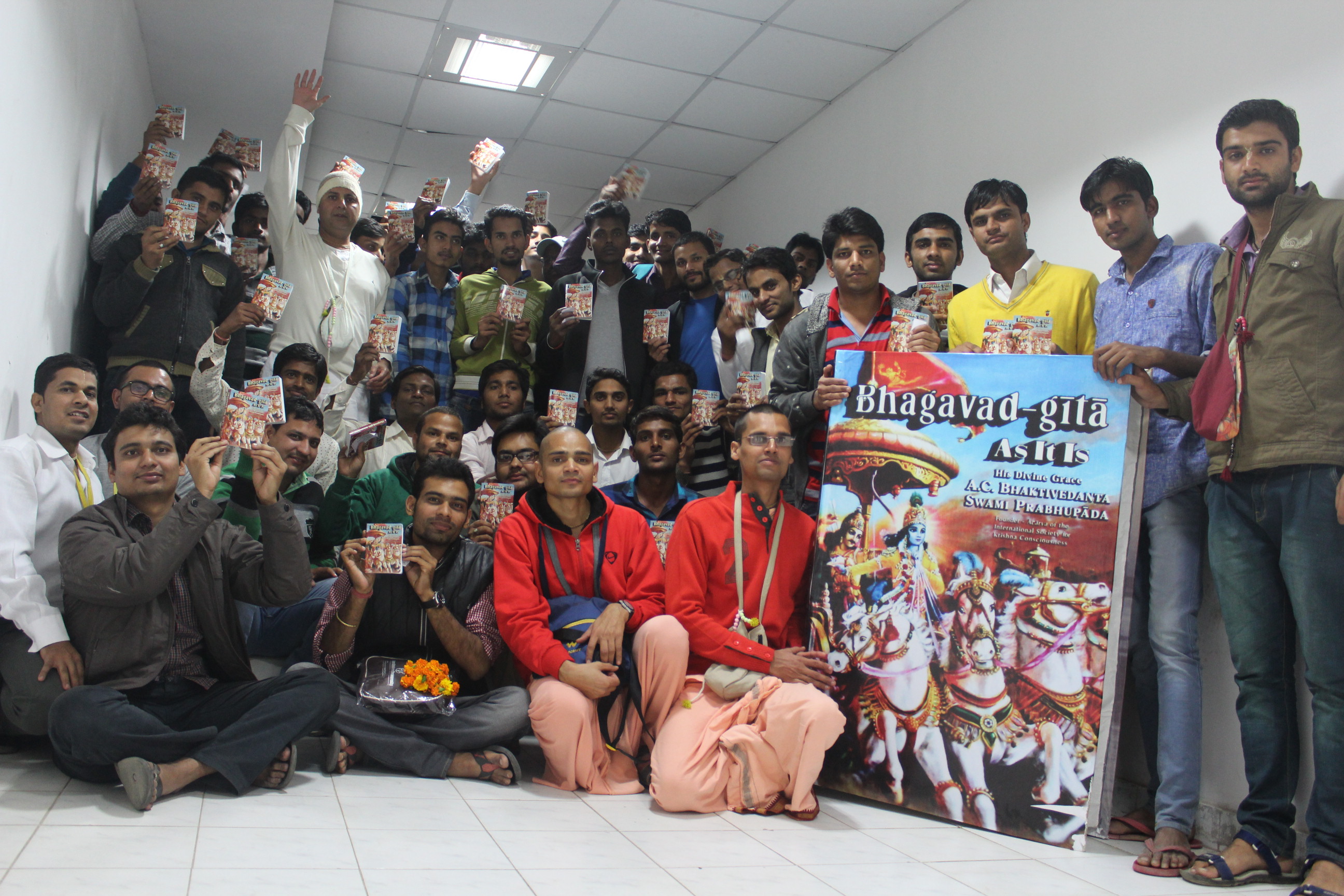 Gita Jayanti was celebrated at Regional College Auditorium on 10th December 2016.Students shared their book distribution experiences.A special lecture on importance of Bhagavad Gita was delivered by Dayalu Nitai Das, President, Hare Krishna Community.The audience was very much enthralled by a drama based on a life incident of Arjunacarya.Program was curtailed with a ecstatic sankirtan and delicious prasadam. Around 350 students from various colleges attended this program. 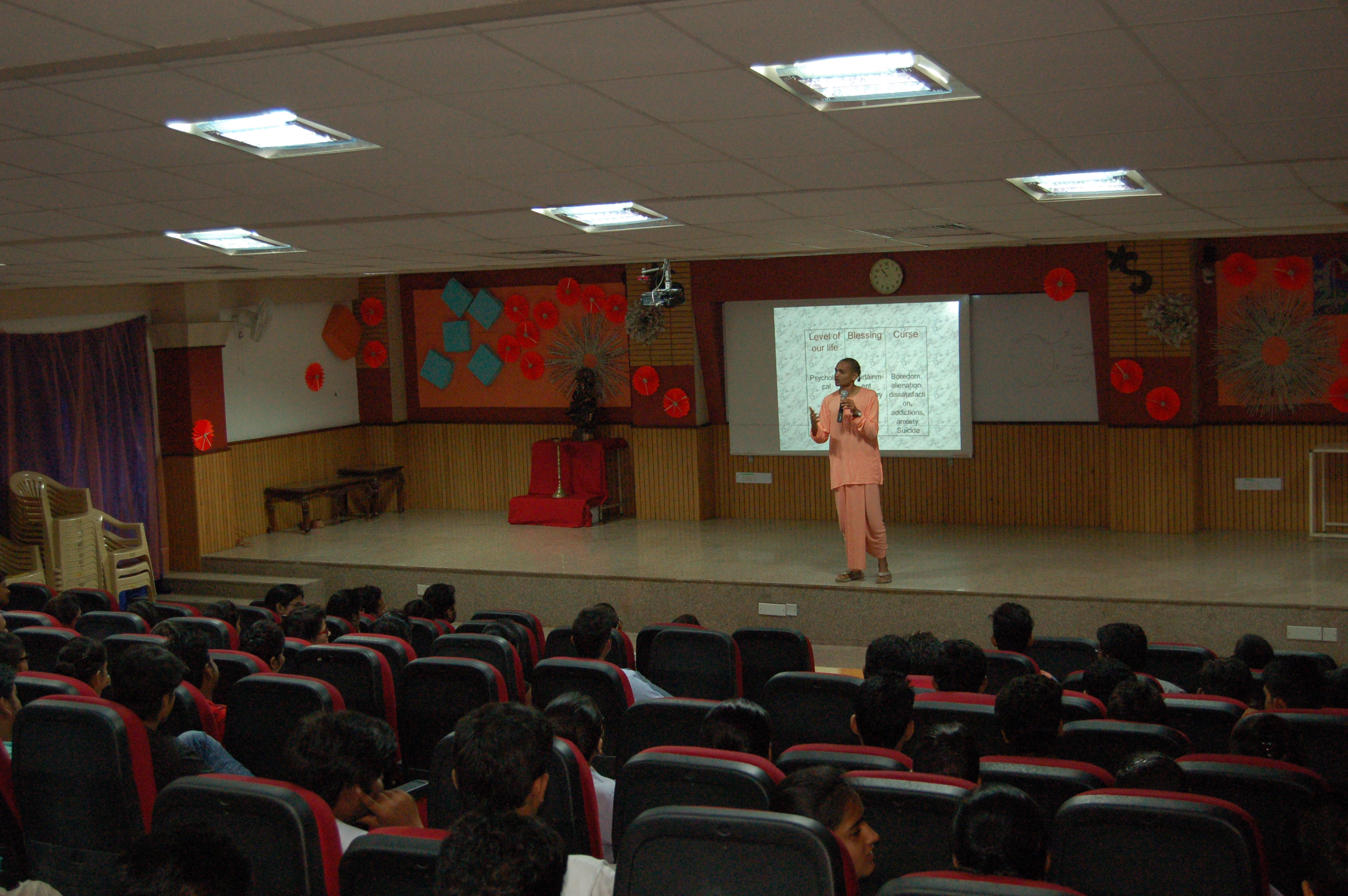 Seminar at Poornima College of Engineering

Seminar held at Poornima College of Engineering, Sitapura Jaipur on the topic “Technology: Curse or Bliss”. Around 250 students from various branches attended this seminar. At the end of the seminar and discussions  sweet prasadam was distributed to students.

Many students came afterwards the seminar to put up their queries and questions regarding the seminar and received very impressive answers. 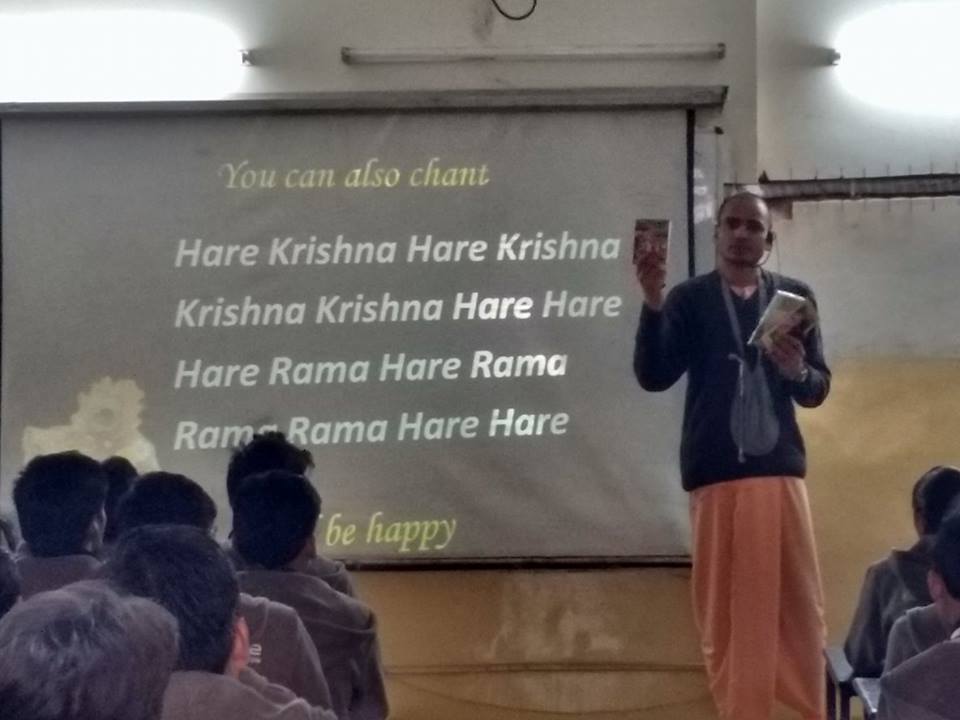 A series of seminars held at Resonance (A preparatory institute for engineering and medical aspirants) in which various subjects like mind control, meditation, real aim of life etc. were discussed.

At the end of each seminar sweet prasadam was being distributed. Many students also took original books of Srila Prabhupada.